Who truly was the monster in Mary Shelly’s story? Was it the creature or the arrogant Herr Doctor. Ultimately, Dr. Frankenstein is the bad guy. Not a Macho thing, but I cried for the creature at the end of the book. That is some gut wrenching pathos! The creature wasn’t a monster at all.

Fair Warning — Hang on for an abrupt turn…

Sasquatch, that’s right Sasquatch. We’re always looking for the creature, the monster. We must bag one to prove it exists. We need body parts! Get the pitchforks and torches. Sorry, slipped there for a minute but you get the drift.

One of the southeastern tribes quit trading with the men of the forest because they were cheats. They got the better of our red brothers every time they traded. Sounds like they were pretty smart. There are tribes that consider Sasquatch to be the Wise-Ones, guardians of the forest.  I believe it goes one step further, The Wise-Ones are the forest ninja. They have the ability to cloud men’s minds. Or at least play with our heads a bit.

Continuing on this slant, it would be safe to assume they have a way to honor their dead. Perhaps in the Tibetan tradition, they feel the shell is empty at death so the body get’s chopped up to feed the vultures. We haven’t found any remains because the Sasquatch understand, if remains are found we will look for them harder. We’re human; it’s what we do.

Let’s face it, the Hairy Man of the Forest has been spotted on all the continents except Antarctica. See, they are intelligent. 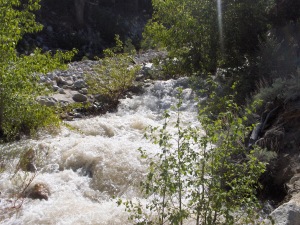 It’s time for a change, go into the forest with respect not arrogance. Don’t carry pitchforks to assail the monster, carry chocolate to share with a being that might be far more evolved than we can hope to be. If I were a superior Empathic being , I’d want chocolate.